Today, the majority of people who play blackjack play online at sites like 32red online casino. And one thing you can’t do when you’re online and is count cards while you’re playing blackjack. The software makes it impossible to do so.

However, in the days before online gaming, there were some legendary card counting teams who took the casinos for everything they could, until they were sussed by the casino staff. 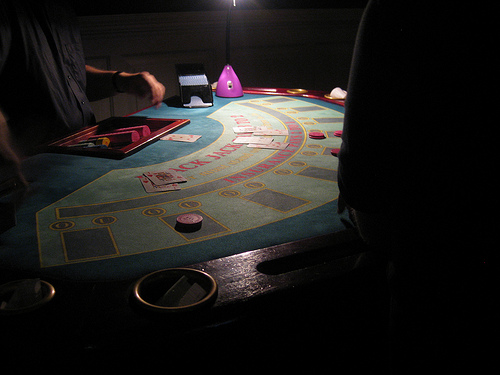 Most well-known of all was the MIT blackjack team, an elite group of students who spent hours upon hours practising card counting in their dorms in groups, before taking to the real casinos to see how they could do. During the spring break of 1979, the team travelled to play blackjack in Atlantic City, allegedly winning $400,000 in their first real casino games.

The team evolved during the next couple of decades with some member leaving the group and others being recruited – from MIT and other high-brow colleges like Harvard and Yale.

The MIT blackjack team became a bit of an urban myth, and there have been documentaries and fictional films made about their exploits. In 2003, a non-fiction book was written about the team by Ben Mezrich. ‘Bringing Down the House; The Inside Story of Six MIT Students Who Took Vegas for Millions’ supposedly used composite characters, but many of the real MIT blackjack team refuted claims made in the book about certain events. However, that didn’t stop movie producers making a film based on the book.

The 2008 film was called 21 and starred Kevin Spacey and Jim Sturgess, and is the story of an MIT professor called Mickey Rosa, who recruits some of his best students to help him fleece the casinos through card counting. It’s a fictional film with a casino heist film and it really brings to life the concept of card counting in blackjack on a large scale.

However, none of this would have come about had it not been for a real MIT professor called Edward Thorp. Sometimes called the father of card counting, he was the person responsible for devising the theory for card counting in blackjack. In the 1970s on an IBM 704 computer he analysed the different probabilities in a game of blackjack and then road tested the theory with an associate, Manny Kimmel. The two earned $11,000 in just one weekend using Thorp’s system. In the nineties, Thorp decided to publish his theory in a book called Beat the Dealer, which leapt to the top of the New York Times best seller list.

In today’s online game, card counting is simply not a possibility on sites like 32red as the games are controlled by random number generator software, meaning that there is no way to cheat the system. However, Both Thorp and the MIT blackjack team have been inducted into the Blackjack Hall of Fame for their card-counting exploits.